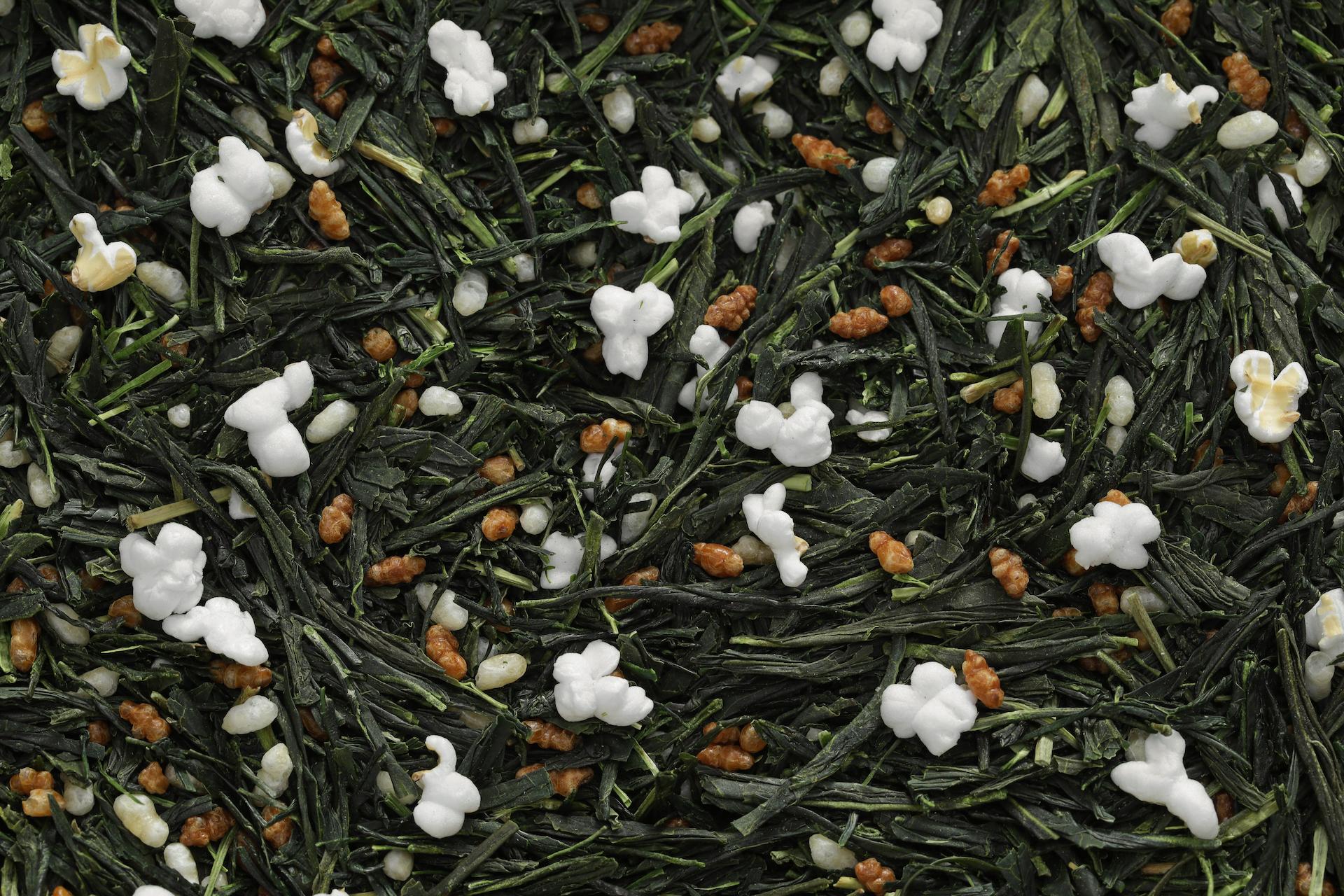 Genmaicha tea is a blended Japanese (sencha) green tea made with toasted rice kernels. Genmaicha is unlike other green teas. Genmaicha is distinctly bitter yet rounded with yummy ‘popcorn’ flavoured notes. This tea is a lovely delight that’s approachable and satisfying, for just about anyone to enjoy.

Genmaicha is a traditional green tea made from camellia sinensis tea leaves. But there’s a little twist to this unsuspecting traditional green tea! It has the wonderful addition of roasted rice kernels, giving it a unique flavour profile that you won't find in any other green tea.

Adding toasted rice to tea leaves was a popular method of tea making to fill out the tea and to make it more affordable to less wealthy Japanese people. Nowadays, all parts of society including Western culture enjoy drinking Genmaicha.

As you’d expect with any green tea, Genmaicha is full of health benefits. Genmaicha boasts high levels of plant antioxidants, polyphenols, as well as folate and vitamin C. It can help reduce anxiety and stress, promotes a healthy cardiovascular system and even has cancer preventing properties. Genmaicha is a lovely Japanese tea for the whole family to enjoy.

Similar to Lapsang Souchong tea, a couple of different ancient legends exist regarding the origins of this unique green tea. Both tales are intriguing and add to the history of Genmaicha tea, making it all the more interesting when you enjoy your freshly brewed tea.

In the 15th century, there was a servant to a Japanese samurai named Genmai. One day, he was brewing his master, the samurai, some tea. In what would become a legendary but terribly fatal error, Genmai accidentally tipped some rice into the tea, which of course he happened to have on his person. This of course naturally angers the samurai who then beheads the poor unfortunate servant.

After the commotion, the samurai settles down and decides to consume his tea only to discover the delicious flavours the rice had imparted to the brew. He quite likes it.

A happy accident? Perhaps Genmai wouldn’t agree, but the rest of the world can thank him. His name lives on, honoured and immortalised in this - ‘Genmai cha’ which translates to Genmai tea.

A different story exists, albeit not as dramatic. More recently in the 20th century, poor Japanese countrymen who couldn’t afford green tea would add roasted rice to bulk out their brew. This meant the green tea they know and love would be longer lasting and had a unique toasted taste. Genmaicha tea is also sometimes referred to as ‘people’s tea’ for this reason as well. 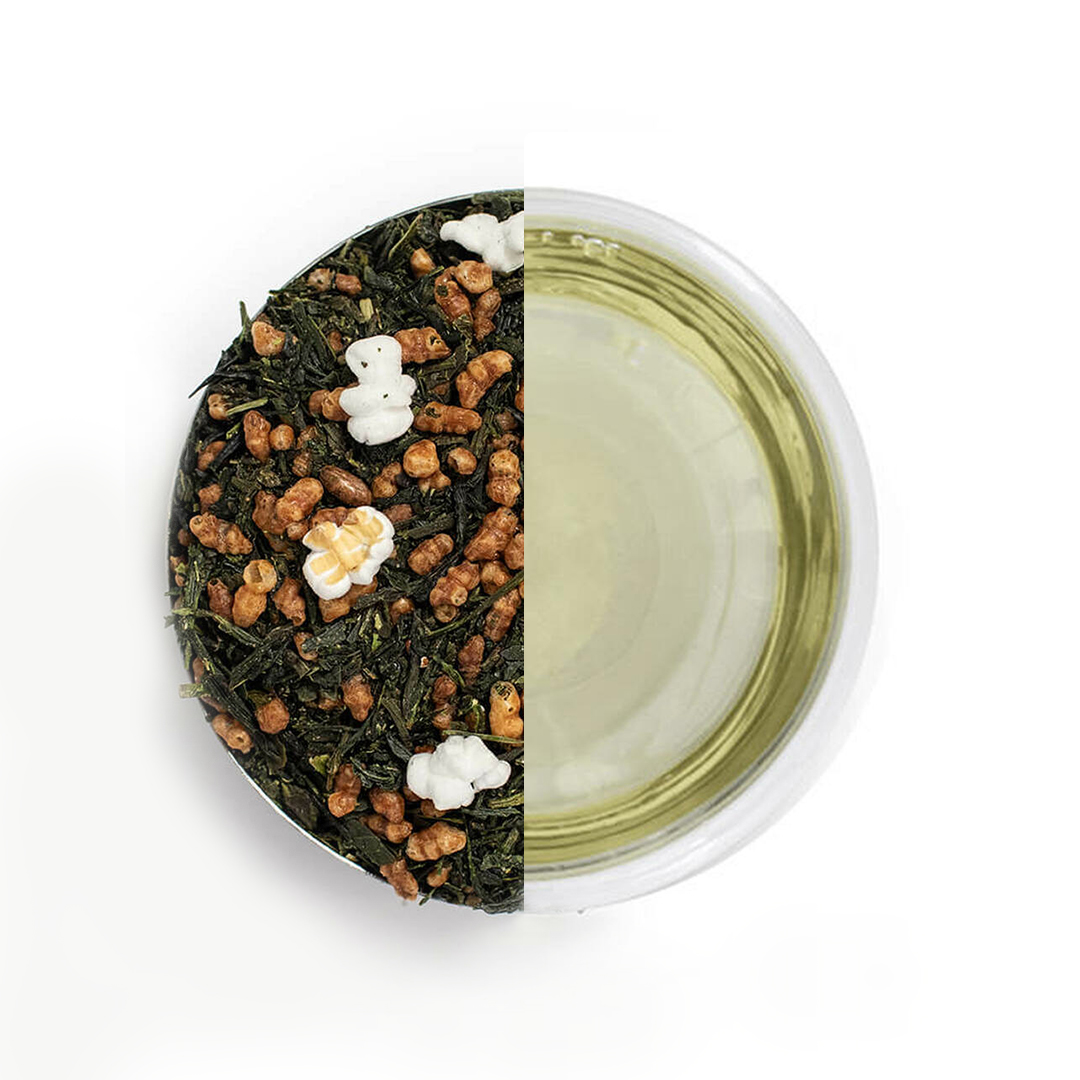 Genmaicha tea is also affectionately known as ‘popcorn’ tea, due to the rice naturally popping during the roasting process. Because rice is high in starch, it gives a lovely sweetness to the tea. The toasted flavour imparts a nutty savouriness which is simply delicious.

Genmaicha tea is both mild and bitter, thanks to the fresh notes from the bancha sencha green tea.

Genmaicha tea is also crisp and refreshing due to the gorgeous green tea leaves, yet is balanced well by a lovely nutty creaminess. With hints of biscuit and caramel, genmaicha is sure to be loved by both young and old alike.

The natural polyphenols in teas such as Genmaicha will provide a range of health benefits. Compounds such as flavonoids and catechins help give the bitter notes to green tea, for which it is famous. These polyphenols chiefly have an antioxidant effect on the body. These polyphenols can confer benefits such as supporting the immune system, boosting microbiome function and helping prevent heart disease. A 2013 Cochrane meta-analysis found that green tea consumption reduced total and LDL cholesterol concentrations in the blood. This was shown to be effective across 11 different clinical trials, making teas like Genmaicha a wonderful choice for heart health.

Epigallocatechin gallate (EGCG) is the primary compound in green tea that’s responsible for improving heart health. The research on EGCG is robust and acts on various parts of the cardiovascular system to help address issues related to heart disease. Experts suggest that drinking 2 or 3 cups of Genmaicha per day, over the long term would confer some of these health benefits.

The ritual of brewing and enjoying a cup of hot tea is therapeutic in its own right. Taking the time to sit and savour the aroma and notes of your tea can induce calmness and do wonders for your mental state. Added to this, there are well established compounds in teas such as Genmaicha that promote feelings of happiness and reduce stress.

The amino acid L-theanine is the calming compound found in green tea that acts directly on the brain and nervous system. L-theanine has a calming and slightly sedating action by mimicking the effects of GABA in the brain. Gamma-aminobutyric acid (GABA) is a neurotransmitter responsible for sleep initiation, relaxation and lowering inflammation. A 2020 scientific paper showed that stress and anxiety could be reduced by the inclusion of L-theanine.

Several research papers both in human populations and in lab studies tout the chemopreventive properties of tea. Green tea in particular can prevent cancer cell growth and proliferation. The EGCG component of green tea has some potent anti-cancer properties. Some studies show that around 700ml per day of green tea has been associated with a decreased risk of cancer development.

A large-scale Japanese population study published in Cancer Science revealed that bancha/genmaicha consumption had a modest effect on gallbladder cancer risk reduction. Here, the EGCG component of Genmaicha tea was praised for its antioxidative and antiinflammatory effects against cancer cells. EGCG also decreased gallstone formation, which is an important risk factor for gallbladder and biliary cancer.

How is Genmaicha Made?

Genmaicha is made using the leaves of camellia sinensis tea. A prefecture in Kyoto called Shizuoka is one of the largest producers of Genmaicha tea.

Here’s how Genmaicha tea is made: 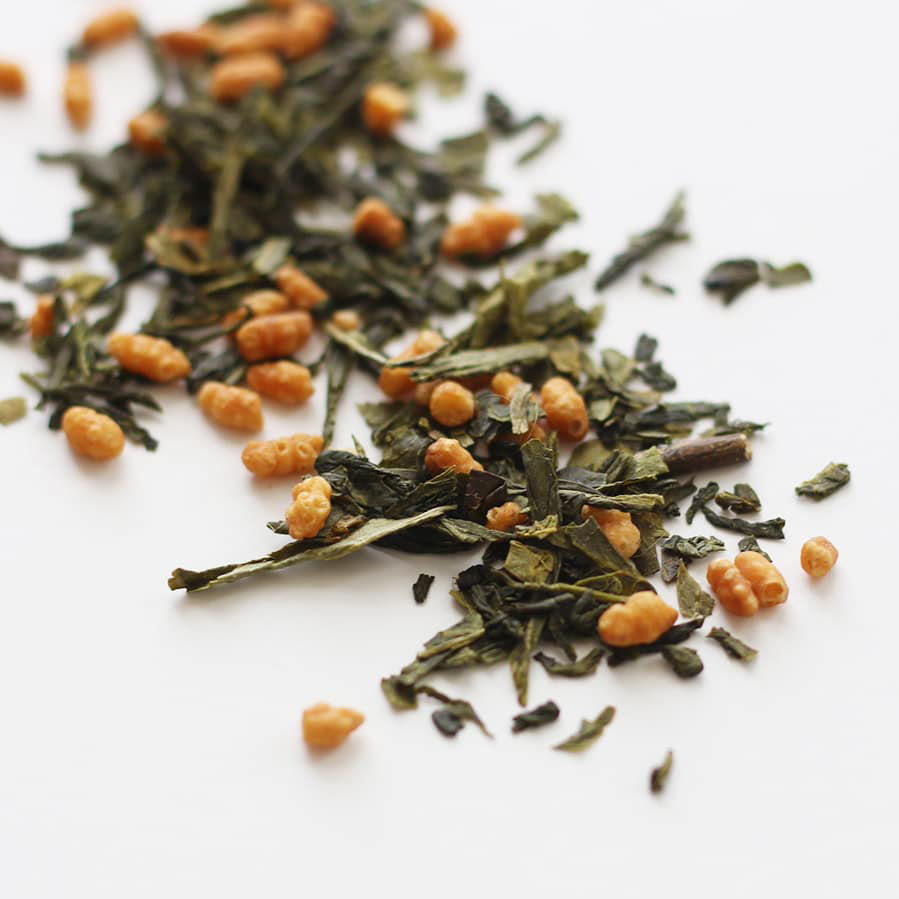 Any tea derived from camellia sinensis leaves will contain caffeine. This means black tea, oolong, green and white teas will have varying degrees of caffeine content. Caffeine is part of the plant’s natural defence mechanisms. In the wild, tea leaves (and plenty of other plants) have produced compounds such as caffeine to protect themselves from being eaten by bugs and larger foraging animals. The bitterness of the leaves detected by preying animals is usually one of the first deterrents.

Because Genmaicha is made with green tea leaves, as a tea it will also contain modest amounts of caffeine. Usually, brewed Genmaicha can contain anywhere from 20-50mg of caffeine per cup, which is significantly less than a freshly made coffee. What’s more, because of the natural L-theanine content contained in green tea, the wakefulness caused by the caffeine is balanced by the calming effects of L-theanine.

You could almost say a cup of Genmaicha tea is the perfect brew to promote a relaxed sense of focus.

How to Brew Genmaicha Tea

Genmaicha tea can be brewed with loose leaf tea or using tea bags. Fresh, loose leaf tea usually yields a truer and more traditional flavour. Classic green teas are usually brewed slightly cooler than boiling point. Brewing green tea at a temperature too high will cause the final tea to be bitter and not very enjoyable. Best to brew these varieties at a slightly lower temperature.

After you’ve got the temperature right, the time to steep can be modified for optimum flavour. The longer the brewing time, the more robust and full bodied the tea will become. The end result is a nutty, pale yellow tea that is both uplifting and satisfying. Genmaicha tea can also be made into a latte and enjoyed as an iced tea during warmer months.

Here’s 3 steps to brew a toasty and delicious Genmaicha tea:

For an iced tea, brew the genmaicha tea in the same way as a hot tea. After your preferred brew time is finished, allow to cool to room temperature, then serve over ice.

Add a squeeze of honey or a slice of lemon, or enjoy your delicious Genmaicha tea on it’s own!